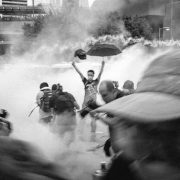 Hong Kong is a place with controversies that lies just across the Taiwan Strait. It had gone through over 150 years’ high-pressured colonial governance under the British Crown. Her misfortune did not turn into cheers following the handover of the sovereignty on 1st July 1997. A new structure has since that day come into force, known as the “one country two systems”, which was formulated by the then Chinese paramount leader Deng Xiaoping regarding China’s policy toward Hong Kong after the handover. The model is aimed to set Hong Kong as a model to Taiwan across the Strait. Basic Law, being the region’s constitution[1], bears the mission of safeguarding the ways of life of Hong Konger and put the idea of “one country two systems” into practice. After almost 20 years of the handover, along with incessant social unrest, tension and fear across the street in Mongkok to the skyscrapers in Central, there is considerable doubt that whether the “one country two systems” framework and the Basic Law serve as a paradigm or dead specimen to the Taiwanese. Through the illustration of the recent Causeway Bay Books disappearances, this piece will briefly introduce the Hong Kong legal system under the framework and the uncertainties looming over the region.

The legal system of Hong Kong largely follows that of the United Kingdom. The independence of judiciary and the trustworthy common law is a legacy that Hong Kong takes pride in after the British colonial development. From the constitutional perspective, Hong Kong has absolute monetary independence[2], and enjoys a distinct custom[3] and financial system[4]. The region even controls its own taxation and fiscal policy, border[5], and issues its own passports, which is rare and unique from the perspective of an autonomous region without the genuine sovereignty. Also, the “one country two systems” successfully allow Hong Kong to join international sport or cultural events on its own, and can even sign trade treaties without the approval of the Central People’s Government. The above guarantees are all set forth in the Basic Law and this constitutional document contains this incredibly high autonomy which allows Hong Kong to preserve its economic prosperity. There are even comments that Hong Kong is a semi-country simply without sovereignty.

Hong Kong judiciary seizes the opportunity and keeps making progressive judgments without the fear of holding opposing opinions to the executive branch. The independence of the judiciary is specifically prescribed in the Basic Law Article(s) 2 and 19 and it has been credited for the success of Hong Kong’s development. Investors can put their money in Hong Kong (which is the nearest spot to the rising China) without the concern of mainland political-tainted courts. Hong Kong courts even held the power of final adjudication which is crucial to the fact that almost all cases in Hong Kong is resolved locally (not in mainland). This power allows the judiciary to enjoy even higher degree of judicial independence as in British colonial era. (The right used to belong to Privy Council in the UK) The Court of Final Appeal, which was designed to replace the original Privy Council, undertakes the role and becomes the destination of all major litigations including cases concerning politically sensitive right of abode, complicated money laundering and fraud, and even epoch-making LGBT (Lesbian, Gay, Bisexual, Transgender) right. The court is more willing to refer to the UK and other common law precedents and is prestigious for setting leading case law in the whole common law world. It is also deeply trusted with people’s confidence and it further deepens them with having one foreign judge from other common law jurisdictions to sit in the court traditionally.[6] All the above are proved to be a boost on the foreign investments.

On the other hand, Hong Kong’s political dilemma did not cease lingering people’s mind. Recent incident of Causeway Bay disappearance provides the best illustration of the difficulty. In December 2015, five staffs of the Causeway Bay Books including Lee Bo disappeared one after another and is believed to be “politically kidnapped” by Chinese government[7]. The five members of the Mighty Current Media Company is famous for selling political books which are sensitive and banned in China. Some evidence shows that they were detained and taken away by the police force of the PRC under the name of “assistance of investigation”. If it is true that the law enforcement agency secretly entered into Hong Kong and abducted the citizens, this would have been a clear violation of the principle of “one country two systems”. Freedom of expression is protected under Article 27 of the Basic Law and is an iconic example of the one country two systems since the same kind of freedom has generally been regarded as restrictive in mainland. Similar protection in Article(s) 28, 29 of the Basic Law also shows that the disappearance of booksellers is unjustifiable. Furthermore, according to Article 22 of the Basic Law, no mainland governmental departments are allowed to interfere affairs within the region; if the police of China can enter into Hong Kong and exercised their power and authority based on Chinese legislation; it showcases China’s ability to go against the principle and bypass the independent judiciary even though it is expressed in clear words on constitutional text.

The incident not only scares local Hong Konger, it further slapped heavily on the investors’ confidence in that the original sense of security has now been replaced by uncertainties and complicated political issues which are the least a foreign investor would like to confront. All the above should be taken into account with the fact that Chinese cities are now burgeoning and places like Shanghai, Guangzhou, Xiamen is likely to take over the role of Hong Kong (or have already taken) in the near future. Hong Kong, which once prided itself as the place where international capital flowed to and the hub of East Asia, is now facing its tipping point as what comes at the price of political controversy may be the loss of foreign investments and the reliability of the independent judiciary.

Is Taiwan Ready to Join the Trans-Pacific Partnership? – A Brief Discussion...

Streaming League of Legends and SpectateFaker – Would Arbitrary Game Licensing...
Scroll to top